What Can You Expect?

Patent Allowance Rate - You may be considering investing your time and money in a US patent office application. What are the probabilities you will get a patent?

I can't tell you exactly but I will try to give you a sense of the current trends below.

In most of the 80's and 90's the patent allowance rate hovered around 65 %. Meaning the average application had about a 65% chance of later issuing as a patent. At least I think that is what that means - I have been unable to find how the US patent office calculates this.

At that time there was quite a bit of sniping at the patent office that they were making it too easy and allowing too many weak patents to issue. Actually there is no definitive data I am aware of that this was true. But it does not matter - for whatever reason things began to change.

Beginning in about 2003 the patent allowance rate started to drop significantly. By this last year (2008) it was down to 44%. I understand this is the first time the allowance rate dipped below 50% for at least the last 30 years. 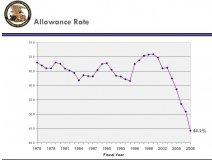 It is difficult to know all the reasons for this. The US patent office has mentioned that they have put increased efforts into internal quality control. This could well be a response to the earlier criticisms of "too many easy allowances".

So What Does It Mean to You

Any easy answer is that it is getting harder, longer, and more expensive to get a patent. Counterbalancing that you may be getting a stronger patent when you get one. Maybe - it is hard to tell. But you need to be aware that the probabilities have changed.

I am just cocky enough to think I can still get good patents issued in this new environment. But there is another consequence of all of this that has me concerned. A significant revenue source for the US patent office budget is issue fees and maintenance fees for issued patents. When the allowance rate drops the revenues drop.

So the net result cannot be good.

The Patent Allowance Rate
Return to the Top of This Page